What started last Monday as a protest by construction workers against the policy of mandatory vaccination has changed into daily continued demonstrations by anti-vaccination and anti-lockdown activists.

On Monday, it was construction workers gathered outside the CFMEU building. It was later replaced by men who marched through the city and shut down a major Melbourne bridge on Tuesday. On Wednesday, it was the Shrine of Remembrance becoming the centre of protest with criticism by RSL veterans and society over the disrespect towards the memorial shown by protesters.

Protesters through online live streams saw their actions to be outright tyranny on the unvaccinated being deprived of the right to live. Viewers of these live streams, however, were not Melburnians but anti-vaccination believers from all parts of the world who were fuelling energy to the protesters.

It is clear that protesters are not receiving information from mainstream media. They believed that they were the ones who knew the “truth” and were eager to break the law to fight for the “truth” that they believed. They felt sorry for the majority in the society who were worried about protesters being infected, for being unable to receive “correct” information about Covid-19 as they were “controlled” by mainstream media.

We have seen this phenomenon when people chose social media to be their main source of information. People sharing similar opinions will reinforce their own views when they receive information from limited sources shared only among those with similar views. People simply start to believe a myth that they have created.

Many of these anti-vaccination activists have targeted the CALD migrants to promote their theories as they knew that few migrants were receiving information through mainstream media. Their success will mean disasters to the CALD communities. At the beginning of this pandemic, we had seen that CALD communities were slow in responding to restrictions and social distancing measures. Recently we found a low vaccination rate and high infection cases in suburbs with lots of new CALD migrants.

The governments must make sure that correct Covid-19 information is transmitted and continuously circulated among CALD communities.

Diversified but should not be divided 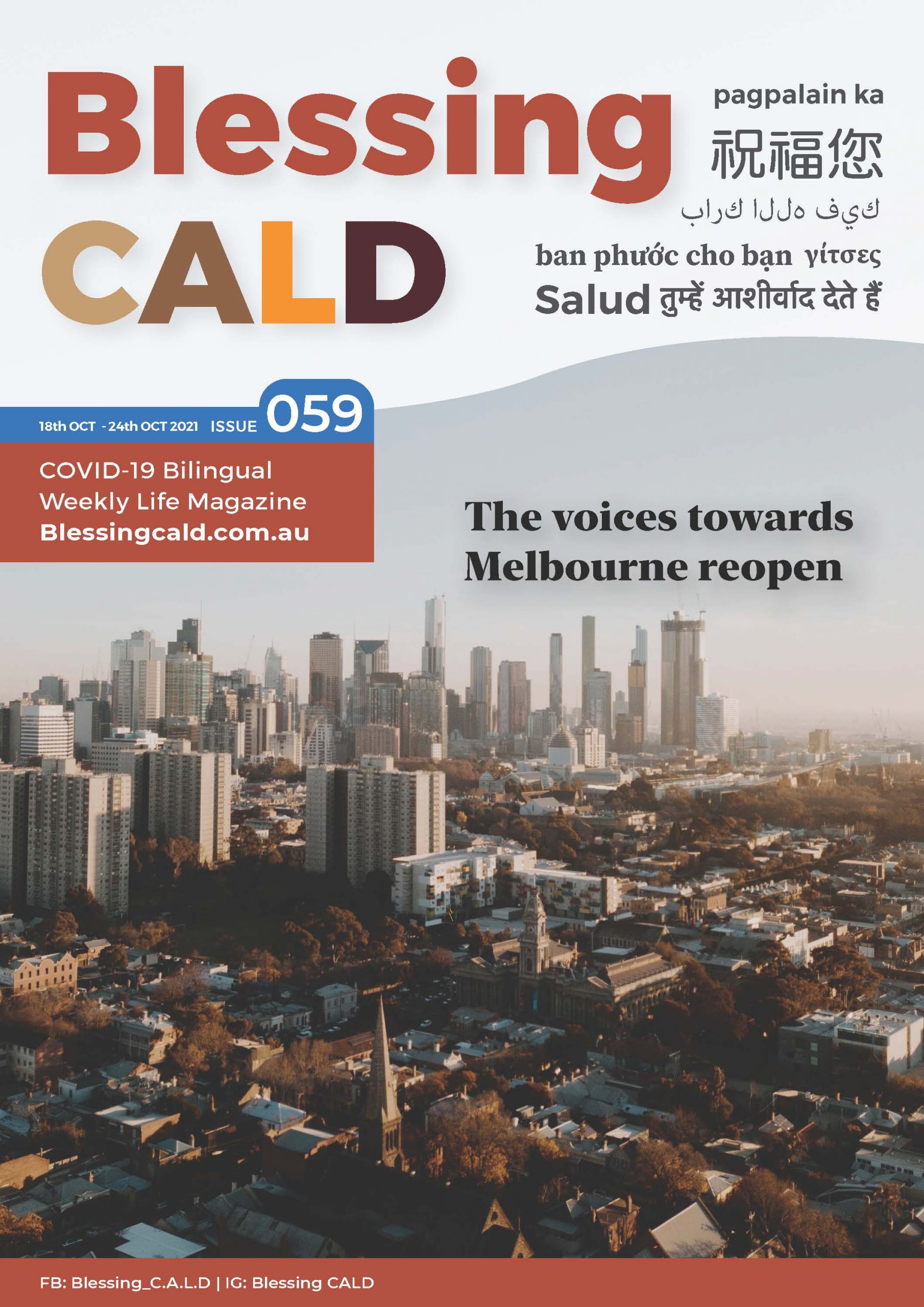 On Sunday, Premier Daniel Andrews announced that Melbourne would ease its restriction from 22 October. People can leave their homes without any reason to wherever to metropolitan Melbourne. Every household can have 10 visitors every day and 15 people can gather outside. Pubs, clubs and entertainment venues together with hairdressers and beauty salons can open with a restricted number of patrons. Weddings, funerals and religious gatherings will open with limited attendance. However, retail businesses and gyms will still have to wait and people are still required to work at home. In short, Melburnians are given some freedom but still need to wait for probably another 10 or more days to become normal or “Covid normal”.

This follows from the reopening of Sydney last week. Up to this moment, there is not a great surge in new cases in NSW. The federal and state governments now emphasize “living with the virus” which means Covid-19 will no longer be seen as a problem if the number of patients hospitalized is kept manageable. The message from the government is: Covid-19 is unavoidable but people will be saved from serious illness or death through full vaccination. And NSW and Victoria are both on the track to have a high vaccination rate.

Now we see the light near the end of this Covid-19 journey. However, great damages to society and everybody have been done. Small businesses are hit drastically. They were not supported well and it is not clear how many can survive to the end of this journey. Society is no longer the same and businesses are worried that how many of their customers will remain after reopening. Those businesses which have closed or workers who have lost their jobs in the past two years will face the challenge of how to rebuild.

New migrants who have few connections and many deprived of information will need special help from the governments to rebuild. The governments can build up better networks to help the society to rebuild after the Covid-19 pandemic. The need of the CALD communities cannot be neglected or forgotten.

Who needs a booster now? 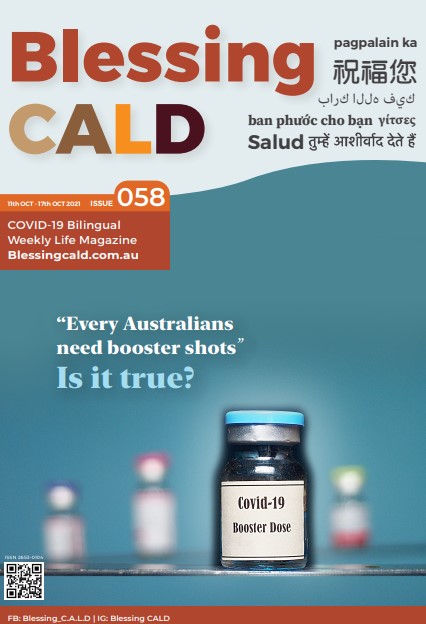 Last Friday, the Australian Technical Advisory Group on Immunisation (ATAGI) announced a statement for the administering of the third dose as a booster to people who are severely immunocompromised. That was immediately circulated in social media as the need for a booster for everybody and about when that would happen. That is how misinformation and disinformation are produced which results in challenges in fighting the war with the Covid-19. Among the CALD communities with little English, the war is still more difficult to fight.
Clearly, ATAGI was making a statement on how to protect the severely immunocompromised people. There is a very clear definition of this group of people and nobody should mistake that as “everybody” unless their English is very poor. As earlier as on 23 September, ATAGI announced it will provide preliminary advice on the need and timing of additional doses in the broader population by the end of October. At this moment, they are still looking at the experiences of other countries.

In WeChat, we saw the mixing up of “boosting vaccinations” and “booster vaccinations” in many messages circulating. This is not unusual as most of the WeChat messages were translated messages produced by someone who knows little English. It is the translator who had misunderstood the message and began to propagate this as disinformation. This is an alarm to Australian governments that accurate and reliable information sources for CALD communities are in great need.
Yes, all Australian governments are “boosting vaccinations” to achieve the national plan of reopening. NSW has reopened today as over 70% of the 12+ population have received full vaccination. Within two weeks time, Victoria will follow suit. In order to be more effective in controlling the expected rise in infected cases jeopardizing our medical system, the more people vaccinated, the better the result. So “boosting vaccinations” is a priority.
But this is totally unrelated to the “booster vaccinations” announced by ATAGI for those who are unable to respond to vaccines effectively for various reasons. ATAGI estimated that about 500,000 people that is about 2% of the Australian population are eligible. Yes, the general public may need a booster but experts have indicated that it will be at least 9 months after the second dose that such a need may emerge.

Diversified but should not be divided 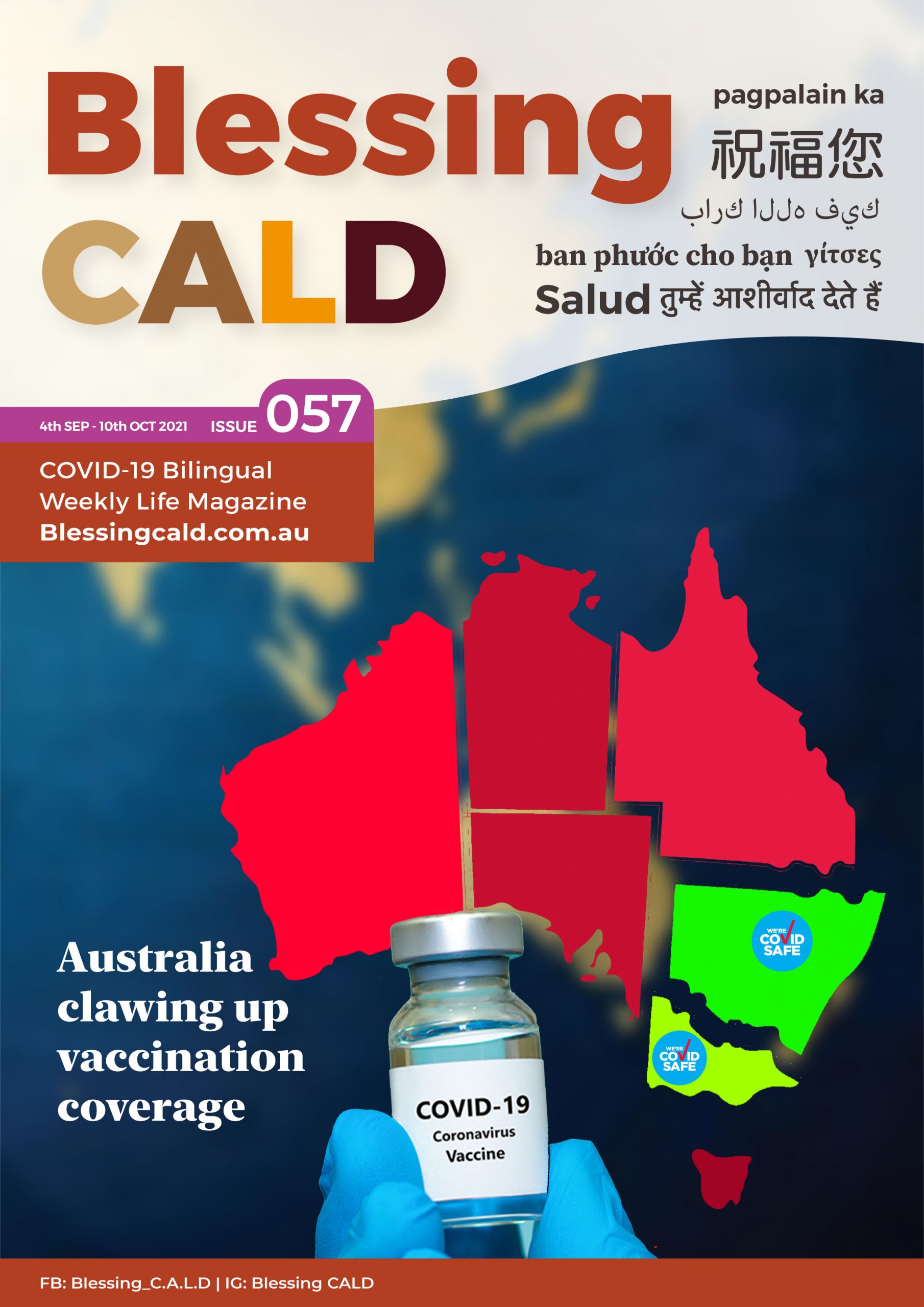 Australia is now practically divided into two parts in terms of its strategies towards Covid-19. ACT, NSW and Victoria will be moving towards 80% double vaccinated in a few weeks. According to the national plan, these states will not be in lockdown and the international border will be opened for fully vaccinated visitors. “Living with the virus” will be the new Covid-normal norm for this part of Australia.

On the other hand, in 6 weeks time, all other states will still have less than 70% of people being fully vaccinated and it will be another few months that these states will achieve the 80% fully vaccinated benchmark. This in fact means that this part of Australia will be closed to other Australians and also remains isolated from the international world.

The federal government has no choice but to accept this as a reality as Prime Minister Morrison had indicated at an earlier time that we would ultimately be in the same stage even though not necessarily at the same time.

We have people coming from different countries settling in Australia especially after the 80s. CALD communities have become a significant part of Australia that cannot be neglected. In fighting the war with Covid-19, information has not been properly and fairly distributed into all CALD communities. As a result, some CALD communities have suffered more than others. It is time that Australia needs to address this important discrepancy.

Australia can no longer assume that we are a monoculture society. We are diversified and hence CALD communities needs should be addressed fairly. However, we are not divided. Instead, it is through supporting our common values and love for this country that we brought prosperity and richness to this country resulting in this treasured diversity. 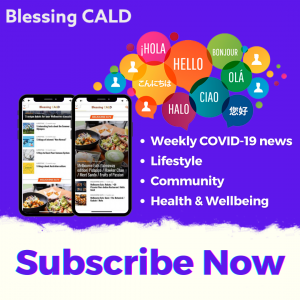