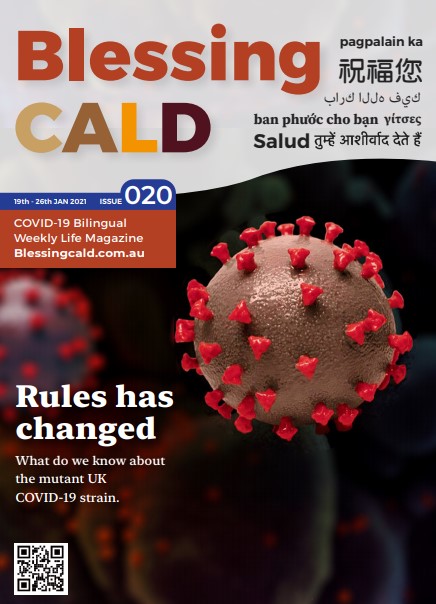 We have experienced a Covid-Normal Christmas and New Year break in Australia with ups and downs.
The governments understood that most Australians wished to celebrate these days with their loved and hoped that restrictions could be relaxed. A few community transmissions in NSW and a new UK mutant of the Covid virus found in Queensland pushed everybody into tension.
To prevent the mutating virus coming into their states, most state governments immediately blocked visitors from Queensland. Firework in Sydney was the only symbolic celebration of the New Year among Australian cities with few audiences. It was only after two to three weeks that with a controlled number of community transmissions that put things back to normal. It is a blessing that Australia has not reverted to serious lockdown during this period.
Yes, the UK mutant was found to be more contagious and dangerous. The burst in the number of infected around the world indicated that we should not be too optimistic to believe that the hard time is over. Experts warned that even with the approval and starting of the vaccination program in the US, UK and other countries, the threat of Covid-19 for the whole world will not be over at least in the first half of 2021.

We need to learn to live harmoniously in a Covid normal society for a while.
It means we still can have the Australian Open in Melbourne, but the players would need to have a quarantine before the match. On 18 January, 5 persons coming for the competition were found to be positive even though they have checked to be negative before abroad the plane. At least 72 players isolated and without practice training because positively infected cases were found in their flight. We are quite sure the performance of the players will be affected, but we still hope to see good matches.
It means that we are going back to schools but our classes would be ready to go online once someone in the class be found positive. It also means that you can visit another city but may not be able to go home because of a sudden border closure.
Yes, we need to be going back to normal life but be ready to accept any sudden changes when the virus Covid shows its strength.

#019 Grace and Justice to Australia

Message from the Publisher #026 – Report card for the first week

Report card for the first week

On 24 February, an untrained doctor was found giving 4 times the scheduled dosage to two seniors in an aged cared facility in Queensland. On 26 February, it was confirmed that 25 virals (over 120 doses) of unused vaccine had to be disposed of as the aged care facility could not confirm they were stored at the required temperature. A 31 million campaign has started to combat the increasing misinformation emerging around vaccinations. And the Home Affairs Department confirmed that a “myth busting” unit has been established to work with the Health Department to counteract misinformation and conspiracy theories surrounding the vaccine.

The first week of the delivery of the vaccination program was not up to standard.

There was ample time for the federal and state governments to work out the delivery schedule and provided training for the people involved. If we have learned from overseas experience in delivering the vaccination program, we should be better prepared.

CALD leaders have suggested that special consideration to the delivery of the vaccine to the migrant communities should be made as they were groups with little government information and exposed to intense misinformation from various sources. For these communities to gain trust to receive the vaccine, CALD community groups and their leaders should be invited to participate and setting role models.

It is clear that until a majority of Australians have received the vaccine, society will not be going back to normal. The various government authorities should learn from this first week of operation that they should spend greater efforts to listen to opinions rather than following a bureaucratic protocol.

A new stage of the fight with Covid-19

Last week marked a new stage of our fight with Covid-19.

In the US, the death toll by Covid-19 exceeded 500,000 and nearly 2.5 million died in the whole world. The number of infected totalled more than 112 million. Fortunately, the daily number of newly infected has gone down from a peak of 850,000 to 300,000. It is not sure whether this is resulted from the northern hemisphere becoming warmer after a cold winter, or the vaccination program started in the US and many European countries. But at least this is a good sign for the whole world.

In Australia, Prime Minister Scott Morrison has received the vaccine with a group of 20 including aged care facility residents, aged worker, health worker, and defence personnel. Chief medical officer Paul Kelly and Chief Nursing Officer Alison Mcmillan as decision-makers of this vaccination program also took the vaccine. The government is trying to build up trust in the public about the safety of the vaccination program.

Yes, vaccines are kept at minus 70 degrees and handling of these vaccines becomes a challenge. Doctors and health personnel need to be trained to work with special arrangements to assure that the vaccines would be stored and handled in the proper way. It is hoped that the Oxford-AstraZeneca vaccine which has been approved to be used and produced locally will be an easier-managed vaccine to be used.

In last week, in the fight against the to-be-installed law by the federal government to force technology companies to pay news provider in sharing the news, Facebook has banned many government websites to post their information resulting in that important Covid-19 information not accessible on Facebook. Australians protested vigorously and the image of Facebook tarnished in this foolish action. A group of federal MPs with medical background had urged the Australians not to trust Covid-19 information received from Facebook since the official information was blocked.

We believe that Facebook should observe it has corporate social responsibility toward the society that has used its service. 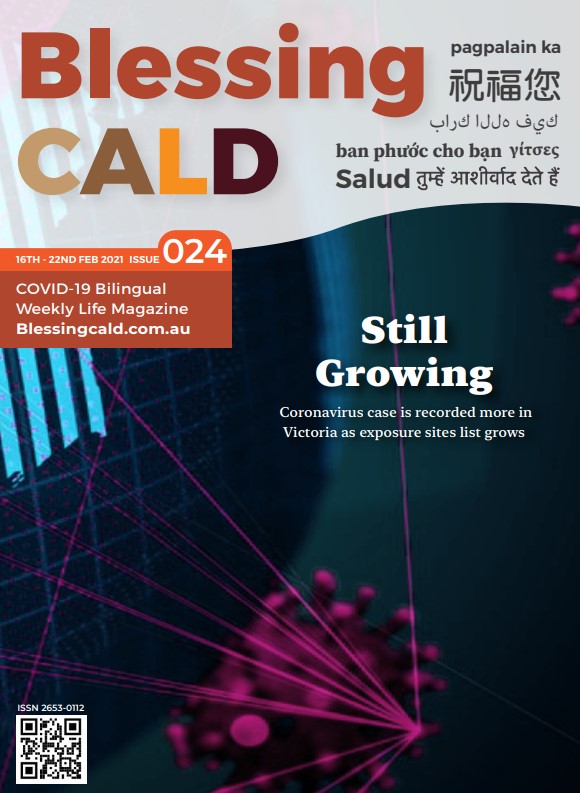 Many from the Asian cultures in Australia celebrated the Lunar New Year!

Unfortunately, Victorians would stay at home as a 5-day snap lockdown was announced on the first day of the Lunar New Year on 12 February. Up to 16 cases from the Melbourne Airport Holiday Inn Hotel cluster with the UK strain of Covid-19 spread with tremendous speed had resulted in this lockdown. With three community transmitted cases in Auckland on Sunday, Prime Minister Jacinda Arden announced a three days stage three lockdown in Auckland and a stage 2 lockdown in other parts of New Zealand. As a result, arrivals from New Zealand to Australia would need to undergo 14 days of quarantine and the trans-Tasman travel bubble paused.

Some in Victoria blamed the Andrews government for the lockdown at one of the busiest weekends of the whole year leading to massive cancellation of bookings on Valentine’s Day and Chinese New Year. Restaurateurs complained of the great loss of pre-ordered food stock at last minutes and asked for compensation. Politicians claimed that this was a result of an ineffective contact tracing system and poorly designed and never fixed hotel quarantine. Many compared to measures imposed by Queensland and New South Wales governments in similar situations and concluded that Victorians suffered from harsh government policy instead.

The precautionary approach of the Victorian government is similar to that adopted in New Zealand which aimed at total elimination of the virus. However, the national strategy of Australia goes for suppression rather than elimination. I believe and hope that the current approach will keep Victoria clean and beneficial to Victorians. However, the Victorian government should provide greater support so that Victorians can endure the extra pain imposed by the government.

Yes, we support taking greater risks in holding the Covidsafe Australian Open at a Covid normal society at this moment. We believe this is beneficial to Victoria and Australia. However, the cost should not be born only by Victorians.